I’ve been on sabbatical for three months and I’m over half way with preparing the materials for my solo album. At the beginning of November, I made an appointment to get feedback on my unsuccessful application for funding the album. I can definitely recommend speaking to funders whenever possible because otherwise you spend time coming up with your own ideas about why you didn’t get the money! I had surmised from my own research that many previous recipients were already further on in their recording careers as well as having had significant nominations for prizes and lots of radio play. I was told my application was really strong but because I had listed my genres as “classical”, “world” and “folk” in that order (without realising that they would subsequently be prioritised in that order), the classical reviewer had stated that the concept and proposed content didn’t seem “classical enough” compared with other classical applications.

Massive lesson learned for me and I’m really grateful to the funders for making feedback available but it’s also made me think a lot about how my music actually does fall between these categorisations without being in one genre specifically. I’ve been veering between feeling slightly displaced and boldly pioneering! Why does music get shoved into these boxes? – for the people who stand to make money out of it and need to carve out specific audiences for it? I don’t really care who my album reaches – I’m not trying to target any supposed “type of person/consumer” in particular, I hope that someone of any age/ability/preference could enjoy it and get something from it. I’d also like to make it as beautiful and meaningful as it can possibly be, with the contributions of other great artists in performing and recording it.

If I’d put “folk” first or “world” first would the same issue have arisen as my music doesn’t really stand in either of those categories completely?

Do audience members really like to be defined in terms of genre classification? Toumani Diabate’s solo kora playing is virtuosically intricate, draws from the very roots of the kora playing tradition and speaks of Mali and of the world. It’s not just “world music”. Do people like being put in boxes any more than this beautiful Kora from The Gambia from around 1848 likes being put in a glass case and being peered at as a world music curiosity (with a broken string as well – the Stradivarius would never be displayed with a broken string).

Anyway, I’m so bloody minded that the last three tracks, oh sorry, “pieces”, I’ve written for the album since getting the feedback at the start of the month draw more heavily on my “classical” training than they might have done – I’m so naughty! I think it was a combination of wanting to do a slight “two fingers” at not being “classical enough” and the joy of composing two piano based pieces which allow for much more modulation and chromaticism as well as writing a really rather strange choral octet which I can’t wait to hear performed.

All the text for the album derives from Celtic and African “folklore” – my own poetry in response to certain themes and texts from the translations of epics in Gaelic and Mandinka. I’ll tell you more about the central theme in the next instalment. I’ve been really getting into researching and reading different epic tales and finding common archetypes and messages. Let’s hope everyone can find something to enjoy! There will be classical, world and folk influences!!!!

I had a really fun time in Paris at the beginning of November visiting my dear friends Marianne Clarac and Cecile Provot who I used to work with at Musique et Sante. I also caught up with Philippe Bouteloup, Musique et Sante’s Director. Between 2007 and 2013 we did some very exciting European Project work around music in hospital settings, pioneering the movement in the UK, Ireland and in Eastern Europe. I’m really proud of having been at the forefront of that work with such inspirational people. On this trip I got to sing Georgian choral music and a Beatles Mash Up with Marianne and a lovely workshop singing group standing in the courtyard of the Louvre Museum led by Stephen Taberner!

I love Paris and felt totally energised being there. Although you might have noted I was a bit cross about the Kora being stuck in a glass case with a broken string in the instrument museum, I did get to hear a Strad. violin being played by the co-leader of the Paris Philharmonic which made me cry my eyes out. The sound was so grave.

I also went to a fabulous Brazilian singalong samba night and got swept up by the gorgeous, predominantly Brazilian, audience who didn’t care at all that I didn’t know the moves or the songs!

The Moma exhibition at Foundation Louis Vuitton is definitely worth a visit. My favourite was hearing Tallis’s Spem in Alium recorded using 40 different microphones for each part and played back in a large circle of 40 speakers which you could move around to hear different lines. 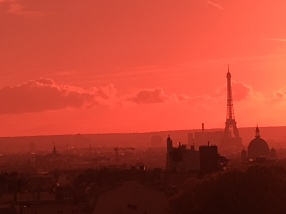 I’ve just come back from a weekend with musical friends – happy times jamming with drums, voices and stringed instruments of different sorts! We also got to hear DhakhaBrakha live in Bangor. This Ukranian group are my current favourite artists – such an impeccable, incredible performance. We got to model our hats with them on stage afterwards! 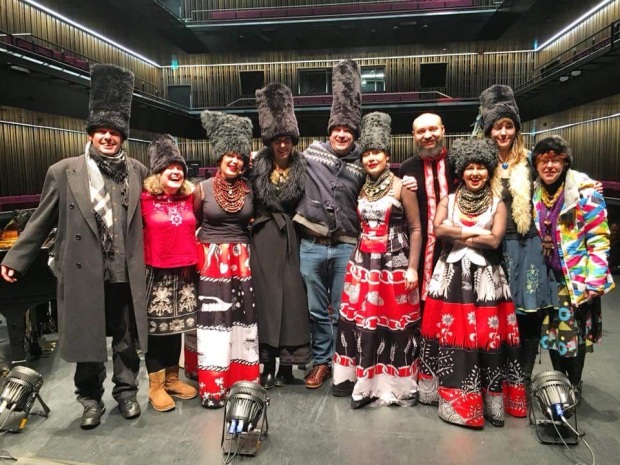 Right, I’d better get back to my kora training – still working on my thumbs and trying to apply some more complex thumb work on the traditional West African songs that will feature on the album…more next month and a very Happy Christmas and New Year to everyone! Here’s a beautiful French carol that we used to sing every year at school to get you in the mood!